Vanadium pentoxide or vanadium (V) oxide is an inorganic compound (an oxide) largely used in the organic synthesis and in industrial processes as catalyst.

Formula and structure: The vanadium pentoxide chemical formula is V2O5 and its molar mass is 181.880 g mol-1. The molecule is formed by 2 vanadium cations V5+ and 2 oxygen anions O2-. It is found in both form: the anhydrous and the three hydrate. Its lattice structure is orthorhombic. Its chemical structure can be written as below, in the common representations used for organic molecules. 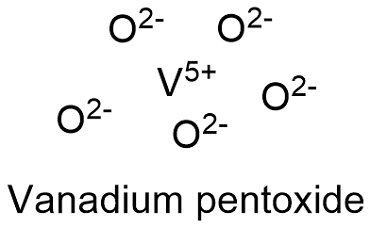 Occurrence: Vanadium pentoxide can be found on nature in ores around the world and it can also be obtained by decomposition of other vanadium minerals.

Preparation: Vanadium pentoxide is mostly obtained from the thermal decomposition of ammonium vanadates at 600 ºC. These compounds are mixture with sodium chloride and the formed oxides are converted to metavanadate NaVO3, which is treated with sulfuric acid and then it is produced a "red cake" that is melted to obtain the vanadium pentoxide.

Physical properties: Vanadium pentoxide is a yellow to Orange solid or a black crystalline solid. Its density is 3.357 g mL-1 and its melting and boiling points are 690 ºC and 1750 ºC, respectively. It is poorly soluble in water.

Chemical properties: Vanadium pentoxide is an amphoteric oxide: it has acid and basic properties and even it is insoluble in water, it can be solubilizated in acid or basic solutions. Vanadium pentoxide is highly demanded as catalyst due it can easily reduce from vanadium (V) to vanadium (IV), this capacity used in reactions of oxalic acid, carbon monoxide and other chemical substances.

Uses: Vanadium pentoxide is used in metallurgic to produce ferrovanadium or iron-vanadium. It also used as catalyst in the sulfuric acid production, in a reaction that is performed at 500 ºC and is prepared using sulfur dioxide:

Health effects / safety hazards: Vanadium pentoxide is highly toxic by ingestion or inhalation. It can cause serious eyes and skin damage. It is a mutagenic and extremely toxic to aquatic environment. It is not flammable.