Trifluoroacetic acid, also known as TFA or 2,2,2-trifluoracetic acid, is a very strong acid widely used in organic and inorganic chemistry due to its high acidity.

Formula and structure: The trifluoroacetic acid chemical formula is C2HF3O2 and its molar mass is 114.02 g mol-1. The molecule is an acetic acid core in which 3 hydrogen atoms of the methyl group were substituted by 3 fluoride atoms. The molecule has a planar part formed by -COOH and a tetrahedral part -CF3. It also has a sulfur atom, similar to other amino acids as cysteine. Its chemical structure can be written as below, in the common representations used for organic molecules. 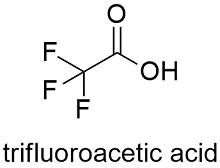 Occurrence: Trifluoroacetic acid is not found in nature.

Preparation: Trifluoroacetic acid can synthesized by treating the acetyl chloride or acetic anhydride in a electrochemical fluorination. This process is followed by an hydrolysis to results in the target product.

Chemical properties: Trifluoroacetic acid is an analogous to the acetic acid but its acidity is 30000 times higher and the explanation is due to the fluoride atom that replaced the hydrogen groups and which promote an inductive effect under the carboxylic group, decreasend the strength of the O-H bond and let the easy remotion of the hydrogen through an acid-base rection. Moreover, the inductive effect stabilized the charge of the conjugate base.

Uses: Trifluoroacetic acid is a precursor to produce other fluorinate compounds such as fluoroperacetic acid. It is added to the HPLC solvents to improve the quality of analysis. It is also a solvent for NMR spectroscopy analysis and also for mass spectrometry. It is a solvent in some reactions, but it is not largely used due its high acidity.

Health effects / safety hazards: Trifluoroacetic acid is extremely corrosive to eyes and skin. It is very harmful if swallowed or inhaled and can cause death. It is not flammable, but in presence of some compounds such as lithium aluminium hydride it can explode.