Formula and structure: The chemical formula of thionyl chloride is SOCl2 and its molar mass is 118.9704 g mol-1. Thionyl chloride molecule has a pyramidal geometry, with a double bond O=S and two single bonds S-Cl. The pyramid is formed due to the interaction of non-bonded pairs under the atoms. Moreover, the molecule has a symmetrical plane. Its chemical structure can be written as below, in the common representations used for organic molecules. 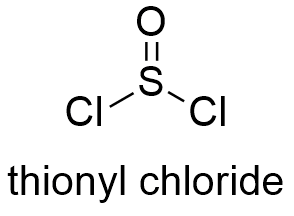 Occurrence: Thionyl chloride is not found in nature.

Preparation: thionyl chloride can be prepared through a synthesis between sulfur trioxide and sulfur dichloride (I) or sulfur dioxide and phosphorus pentachloride (II):

Physical properties: Thionyl chloride is a light yellow to colorless volatile liquid with a pungent odor. Its boiling point is 79 ºC. It is soluble in aprotic solvents such as toluene, benzene, chloroform and ether. In protic solvents as water, ethanol and methanol, thionyl chloride reacts violently producing toxic gases.

Uses: Thionyl chloride is mainly used in the pharmaceutical, dyes and pesticides industries to chlorinate chemical compounds forming a big variety of organochlorine compounds. For example, it can be used to synthesize derivatives of carboxylic acids such as acyl chlorides:

The resultant acyl chloride are very useful intermediate in organic synthesis because the chlorine ion is an excellent leaving group.

Moreover, thionyl is one of the component of lithium-thionyl chloride batteries. In these batteries, SOCl2 acts as cathode (positive electrode) and Li as anode (negative electrode). The redox equation for this process is:

Health effects/safety hazards: Thionyl chloride is extremely corrosive and toxic. It can damage seriously eyes and skin. It is a lachrymator. SOCl2 can react violently with water and protic solvent; in presence of these solvents, dangerous gases can be formed.