Tetrahydrofuran, mostly called THF or oxolane, is an organic liquid extensively used as solvent and also as a reagent that acts as precursor of polymerization.

Formula and structure: The chemical formula of thetrahydrofuran is (CH2)4O; the structure is a heterocycle formed by 4 CH2- bond to an oxygen atom. More specifically, it is cyclic ether. It molecular mass is 72.11 g mol-1. The structure is a 5 member cycle which is less flexible than a open chain of 5 member but less rigid than a aromatic ring. The chemical structures can be written as below, in the common representations used for organic molecules. 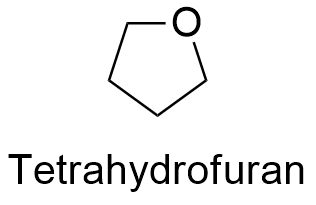 Occurrence: Tetrahydrofuran is not found in nature.

Preparation: Tetrahydrofuran can be produced through several methodologies, some of them are:

- Decarboxylation of furfural to furan using metal catalyst and then, hydrogenation of furan to THF.

- In industry, it is mainly produced through the reaction between acetylene and formaldehyde to form 2-butyne-1,4-diol, which is hydrogenated to the corresponded saturated diol that is cyclized to THF.

Physical properties: Tetrahydrofuran is a colorless, ether-like smell liquid. Its melting point is -108.3 °C and its boiling point is 66 °C. The density is 0.88 g mL-1. It is miscible in water and also soluble in organic solvents as ethyl acetate, ethanol, methanol, benzene and acetone. It is not used in water-sensitive reaction, due to its capacity to absorb water.

Chemical properties: THF is a weak Lewis base, which means, it can donate electrons to chemical species which are lack of electrons (for example, metals/transition metals), and so THF can react with these metals to form complexes and reagents as the Grignard reagent. One of the disadvantages of THF is that it mostly contains compounds as butylated hydroxytoluene to avoid the formation of explosive peroxide when storage for long periods or in contact with air or light.

Uses: Tetrahydrofuran is used to polymerized the poly(tetramethylene ether) glycol to polytetramethylene oxide, which is a intermediate in the production of fibers as polyurethane. However, its more common use is as solvent for many industrial processes and also for polymers as PVC. In laboratory scale is used in a huge number of reactions, for example to prepare the Grignard reagent.

Health effects/safety hazards: Tetrahydrofuran is dangerous to the health; it is highly toxic if ingested. It is an irritant of mucous and it is under revision to evaluate its long term damages to the human health and if it can cause cancer. It is also highly flammable.