Taurine, also known by the IUPAC name 2-Aminoethane-1-sulfonic acid, is a non-essential amino acid, but very essential for mammals and it is largely present in many animal tissues.

Formula and structure: The taurine chemical formula is C2H7NO3S and its molar mass is 125.14 g mol-1. The molecule is a typical amino acid, with an extreme formed by a carboxylic group –COOH and the other by an amine group –NH2. It also has a sulfur atom, similar to other amino acids as cysteine. Its chemical structure can be written as below, in the common representations used for organic molecules. 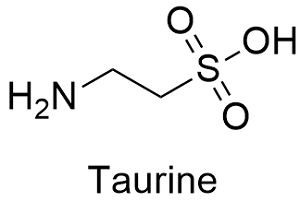 Occurrence: Taurine is found in many animal tissues, especially on the bile, heart, brain and breast. It can be found in milk too.

Preparation: Taurine can be biosynthesized by many animals through the action of the enzymes cysteine dioxygenase and hypotaurine dehydrogenase and from the amino acid cysteine. In industrial process a taurine is produced by the reaction between the ethylene oxide and sodium bisulfate, which reacts and then are added ammonia and sulfuric acid to obtain a taurine partially pure.

Physical properties: Taurine is colorless, odorless and with a slightly acid taste, crystalline solid. Its density is 1.734 g mL-1 and its melting point is 328 ºC and at higher temperatures, it decomposes. Taurine is soluble in water but insoluble in ethanol and methanol.

Chemical properties: Even when taurine is not an essential amino acid, it has important roles in many vital functions and it can promote many reaction of the physiological interested: The N-terminal (amine group) of the taurine reacts with some acids such as cholic acid, through an acid-base reaction, to form bile salts such as taurochenodeoxycholate. The taurine can also regulate the levels of potassium and sodium in cells.

Uses: Taurine is very essential in the diet requirements of many animals, for example cattle and cats. In human, taurine is essential in newborns, which require the taurine for the correct developed. Recently, the taurine has been largely used in food and brewers industry in energy drinks, very popular in many countries. Moreover the taurine has also been employed on the manufactured of contact lenses.

Health effects / safety hazards: Taurine can cause eyes irritation and can also cause skin damage. It is not flammable and it is stable.