Formula and structure: The sulfur hexafluoride chemical formula is SF6 and its molar mass is 146.00554 g mol-1. The structure of sulfur hexafluoride is octahedron, with 6 fluorine atoms bound to a central sulfur atom. Each S-F bond has a 90º angle. Its chemical structure can be written as below, in the common representations used for organic molecules. 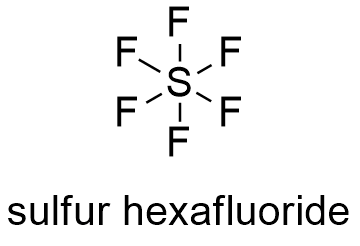 Occurrence: Sulfur hexafluoride gas and the other SxFy gases, were not freely- produced by nature. However, in these days these are found in the atmosphere as part of greenhouse gases.

Preparation: Sulfur hexafluoride is synthesized by expositing elemental sulfur (crystal solid S8) and elemental fluorine (gas F2) at 300 ºC. After the reaction finishes, the SF6 is purified by heating or alkali washing to remove other SxFy gases.

Physical properties: sulfur hexafluoride is a colorless, tasteless and odorless gas. SF6 is non-flammable and it is six times heavier than air, its density is 6.602 g mL-1. Its boiling point is -64 ºC. It is slightly soluble in water and other polar solvents. Sulfur hexafluoride is shipped as a liquefied gas.

Chemical properties: In spite, sulfur hexafluoride has 6 fluorine atoms, which is the most electronegative atom in the periodic table, its dipole moment is 0. It is because the octahedral geometry allow the cancelation of all dipoles associated to the six S-F bonds. In consequence, sulfur hexafluoride is a non-polar molecule that is just slightly soluble in polar compounds. Other important fact about the chemistry of SF6, it is a very stable compound, thus it cannot be attached by other chemical compounds and can be present in the atmosphere for many decades, which is an environmental problem.

Uses: Sulfur hexafluoride is extensively used, as dielectric medium in the manufacturing of electrical equipment owe its high relative permittivity. The magnesium industry is the second major consumed of sulfur hexafluoride, where it works as a gas to fill casting forms. Thus, SF6 has a variety of application in the medicine, where it is used in retinal surgeries to repair the vitreous chamber. Moreover, sulfur hexafluoride is injected as contrast agent for ultrasound imaging.

Health effects/safety hazards: sulfur hexafluoride is non-toxic, however it could be dangerous when inhaled big quantity of gas and it can lead to asphyxia. SF6 is the most potent greenhouse gas (gas responsible by the global warming) due its long-time life and its capacity to absorb or emit radiation in the atmosphere.