Sulfite ion, also written as sulphite, is an ion that is present in many binaries salts largely used in chemical industries.

Formula and structure: The sulphite ion chemical formula is SO32-. The molar mass is 80.06 g/mol. It is formed by one centered sulfur cation S4+ and three oxygen anions O2-. The geometry is trigonal pyramid with the three oxygen atoms forming the base and over the sulfur atom, there is a lone pair of electrons. Its chemical structure can be written as below, in the common representations used for organic molecules. 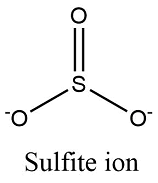 Occurrence: Sulfites occur in nature. These salts can be produced by the organisms of plants and animals. They can be ingested from different vegetables which contain them.

Preparation: Sulfite ions are used to prepared the differents sulfite salts. There are many methods to obtain them and the method depends on the cation that is forming the salt. In general, these salts are prepared from the sulfur dioxide, which produces the anion biosulfite when dissolved in water. The bisulfite ion is the conjugated acid of the sulfite ion and both are in equilibrium in aqueous solutions:

Physical properties: Sulfite ions physical properties in general depend on the cation that is bound to it, forming the different sulfite salts. Some of salts are white solids (as the sodium, potassium or calcium sulfite) and are soluble in water.

Chemical properties: Sulfite ion can form a variety of salts and all of them are extremely stables. The sulfite is a stable ion due to three oxygen atoms are bound through a double and two single bonds, but it remains as a resonant structure in which the three atoms are bound through a bond that has characteristics of single and double bonds. This structure can stabilize the two negative charges, making the ion stable.

Uses: The sulfite salts are mostly used as food preservatives, such as the calcium sulfite, the potassium sulfite and sodium sulfite. They are used as a dried agent too, particularly for fruits. Some sulfites are also used to produce the caramel color food coloring.

Health effects / safety hazards: Sulfite ions are not flammable and in general, moderate consume of these salts is not dangerous for health, although it can be reported as one of the most allergic preservatives.