Sulftate ion, also written as sulphate, is an anion (negative ion) that is largely found in nature and chemistry as a salt or acid derivative with different metals.

Formula and structure: The sulfate ion formula is SO42- and the molar mass is 96.06 g mol-1. This salt is formed by one sulfate center to which 4 atoms of oxygen are attached, 2 of these atoms are forming S=O bonds and the other two are S-O- bonds. These last oxygen atoms are the responsible for the negative charge (-2) of the anion. The geometry of the anion is tetrahedral. Its chemical structure can be written as below, in the common representations used for organic molecules. 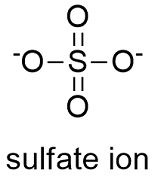 Occurrence: Sulfate ion is largely found in nature as forming different salts and minerals with sodium, calcium, potassium and others.

Preparation: Sulfates can be prepared with a wide variety of processes and depending on the metal to which sulfate is bond. For example, the preparation of metalic sulfates is made from the reaction of metalic salt (in this case barium chlorate) or the pure metal and sulfuric acid:

Physical properties: Sulfates vary in form according to the salt they are forming. In general they are solid, mostly powders. Most of them are soluble in water, except barium, calcium, lead, radium, strontium and mercury sulfates.

Uses: Sulfates are present in many natural compounds, for example in rocks, minerals and salts. They are largely used in constructions as the Epsom and gypsum salts. In electricity as the copper sulfate or in water treatment as the barium sulfate.