Formula and structure: The chemical formula of styrene is C8H8. Its molecular mass is 104.15 g mol-1. The structure is an aromatic ring of 6 members with a vinyl group -CH=CH2 bond to the position carbon. The chemical structures can be written as below, in the common representations used for organic molecules. 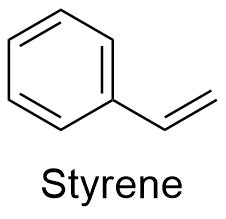 Occurrence: Despite its toxicity, it has been found in nature, as presents in plants, vegetables and fruits. It is also in the resin of some trees and coal tar.

Preparation: Styrene can be manufactured through different processes. One of this process is the dehydrogenation of ethylbenzene using as catalyst iron. This process is responsible by the 85% of the world production of styrene:

Another methodology is the oxidation of ethylbenzene alpha-phenylethanol which can react to acetophenone and then, suffers dehydratation of the alcohol to produce styrene. Additionally, ethylbenzene can suffer chlorination followed by dehydrochlorination.

Physical properties: Styrene is a colorless oily liquid with a sweet smell. The insoluble in water but it is highly soluble in DMSO and organic solvents as ethyl acetate, ethanol, methanol, benzene and acetone.

Chemical properties: Styrene is highly used in polymerization as a precursor of many reaction due to the presence of one vinyl group (-CH=CH2). It groups is formed by a double bond which can easily react or attack deficient in electron-chemical species. The vinyl group is present in other chemical compounds as the methylvinylketone.

Uses: Styrene is used to manufactured resins, polymers such as styrene-butadiene, styrene-isoprene-styrene and particularly, polystyrene. It is also used to fiberglass and cars part.

Health effects/safety hazards: Styrene is highly toxic and the sort exposure to it, results in irritation of eyes, mucous and respiratory-gastrointestinal tracts. It can also cause headache and depression. It has also been suspected of causing some cancers. It is highly flammable and can oxidize other chemical compounds.