Formula and structure: The sodium borohydride chemical formula is NaBH4. Its molar mass is 37.830 g mol-1. Sodium borohydride is a salt formed by cation Na+ and anion BH4-. This anion has a tetrahedral structure, with the Boron atom being sp3 hybridized. Its chemical structure can be written as below, in the common representations used for organic molecules. 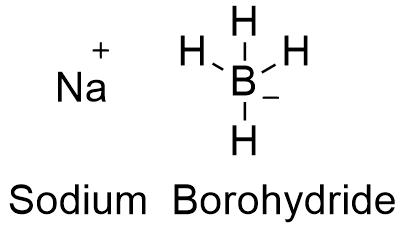 Occurrence: It is not found as a free compound in nature.

Preparation: Sodium borohydride is prepared from trimethylborate and sodium hydride at elevated temperatures (275 °C), in a mineral oil medium. This process is known as method of Schlesinger:

Physical properties: Sodium b0rohydride is a white to gray, crystalline powder. Its melting and boiling points are >300 ° and 500 °C, respectively. Its density is 1.035 g mL-1. In temperatures higher than 70 °C, sodium borohydride may ignite in air (flash point 70 °C). It is soluble in lower alcohols and ammonia and insoluble in organic solvents.

Chemical properties: Sodium borohydride reacts easily with water to form sodium hydroxide. Sodium borohydride is a reducing agent that acts selectively. NaBH4 can reduce a carbonyl group presents in aldehydes or ketones to a hydroxyl group without reduces other functional groups present in a molecule, such as amides or esters. It is a reducing agent lesser potent than LiBH4, but NaBH4 is more used to get selective reduction or in reactions in water (LiBH4 reacts violently with water). 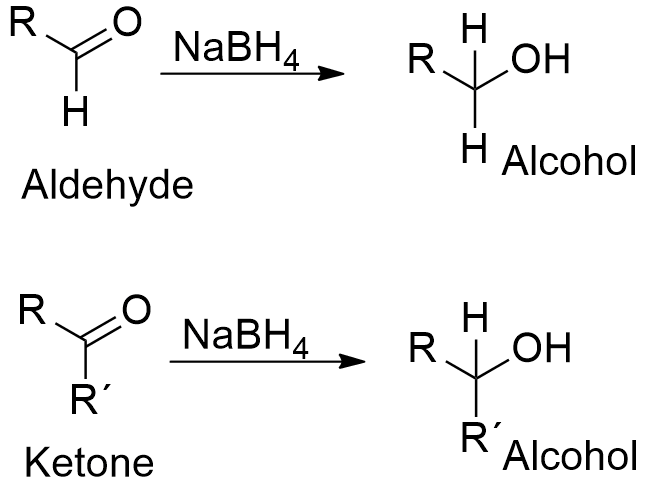 Uses: Sodium borohydride is mainly used to reduce aldehydes or ketones to primary or secondary alcohols. It is also used to reduce some inorganic compounds, for example, it is extensively used in process to produce the blenching agent sodium dithionite from sulfur dioxide or to synthesize gold nanoparticles. Sodium borohydride is also the reducing agent used in the reduction of amino acids and their derivatives. It is utilized by pharmaceutical industry in the production of some antibiotics such as chloramphenicol and dihydrostreptomycin.

Health effects/safety hazards: Sodium borohydride may cause skin burn and severe eye burn. It is highly toxic by ingestion. Sodium borohydride may react violently with water. It is also incompatible with oxidizing agents, acids, glass and some metals such as palladium and ruthenium. It is flammable and it burns vigorously.