Formula and structure: The silver perchlorate chemical formula is AgClO4 and its molar mass is 207.314 g mol-1. Its crystal structure is cubic and it is formed by Ag+ cation and ClO4- anion. Its chemical structure can be written as below, in the common representations used for organic molecules. 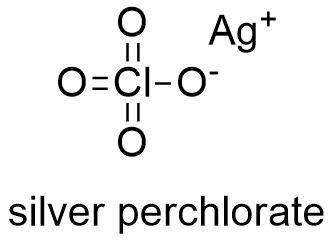 Occurrence: similar to other perchlorates, silver perchlorate is rarely found in nature and most of them is synthesized by chemical industries. Most of perchlorate in nature is found in Atacama Desert in Chile, where it is in deposits of sodium nitrate.

Preparation: Silver perchlorate is produced from the reaction of perchloric acid and silver nitrate or silver oxide:

Physical properties: Silver perchlorate is a colorless, hygroscope, crystal solid. Its melting point is 485 ºC and its density is 2.806 g mL-1. It is very interesting compound, because it is soluble in water and it is soluble in organic solvent such as benzene and toluene.

Chemical properties: In silver perchlorate the anion perchlorate is extremely unstable and explosive, thus the use of AgClO4 is limited in industry. In benzene and other organic solvent, the silver cation of AgClO4 is bound to the benzene ring. Contrasting, when AgClO4 is dissolved in water it just lead to the dissociation in Ag+ cation and ClO4- anion.

Health effects/safety hazards: Silver perchlorate is extremely explosive and it explain its limited use in industry. Moreover, there are various health risks as its high toxicity and its irritant effects on skin and eyes.