Silane is an inorganic gas compound which has particular interest as precursor in the production of silicon.

Formula and structure: The silane chemical formula is SiH4 and its molar mass is 32.12 g mol-1. The molecule is formed by four hydrogen atoms join to an central silicon atom. The silane structure is highly similar to the methane structure, a tetrahedral structure with a central atom and four substituent forming bonds with an angle of 109º. Its chemical structure can be written as below, in the common representations used for organic molecules. 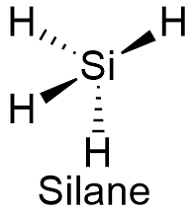 Occurrence: Silane is not found freely in nature, it should be produced by chemical methods. However, it is possible some hydride of silicon can react in nature to form silane.

Preparation: Silane is produced from magnesium silicide and hydrochloric acid:

It can also be synthesized by the reactions between silicon, hydrogen and silicon tetrachloride:

A third route includes the reduction of silicon dioxide (SiO2) in presence of aluminium and hydrogen:

Physical properties: Silane is a colorless with repulsive odor gas. Its density is 1.114 g mL1- and its melting and boiling points are -185 ºC and -112 ºC, respectively. Silane is poorly soluble in water.

Chemical properties: Silane is formed by 4 bonds silicon-hydrogen, these bonds show a low polarity, and thus silane may form many complexes with metals as iron, copper and manganese. These bonds Si-H are also weak, so silane can be easily decomposes by environmental factors such as temperature and it suffer spontaneous combustion in air.

Health effects / safety hazards: Silane is poisonous by inhalation. It is an eyes and skin irritant. It is highly flammable and easily ignites in air and it is also a potent combustion agent. Silane also reacts with oxidizing agents.