Oxalic acid is a toxic organic acid, which is also called ethanedioic acid. It is a strong dicarboxylic acid.

Formula and structure: The chemical formula of oxalic acid is (COOH)2 and its molecular formula is C2H2O4. Its molar mass is 90.03 g/mol. Its chemical structure is shown below. It is the simplest dicarboxylic acid, and consists of just two carboxylic acid groups (COOH) directly attached to each other at the carbon atoms. 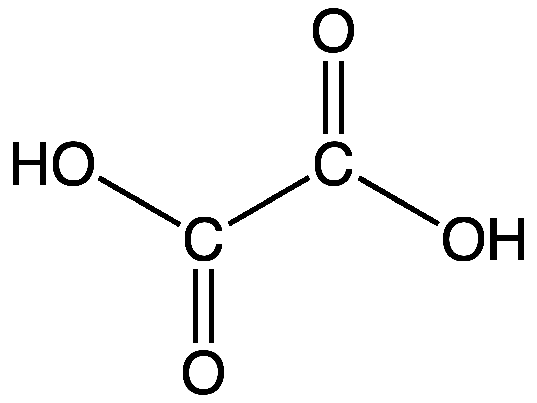 Occurrence: Oxalic acid and its oxalate derivatives are found in several natural sources such as plants, vegetables, leaves, wood and coal, among others. It is also produced in the body by metabolism of glyoxylic acid or ascorbic acid

Preparation: Oxalic acid is commonly prepared by the oxidation of carbohydrates such as sucrose or glucose using nitric acid, and catalyzed by vanadium pentoxide. It can also be prepared by reacting alcohols with carbon monoxide in the presence of oxygen to give the diesters of oxalic acid, which are then subjected to hydrolysis to give oxalic acid.

Physical properties: Oxalic acid is an odorless, crystalline white solid with density of 1.9 g/mL and melting point of 190 °C. It is commonly found in the hydrate form (COOH)2 · 2H2O. It is water soluble and forms a colorless and acidic solution in water.

Chemical properties: Anhydrous oxalic acid is very hydrophilic and readily absorbs water. It is a strong acid. It is the simplest dicarboxylic acid, and reacts as a typical carboxylic acid, forming the acid chloride and ester derivatives. It is a good reducing agent and acts as a good chelating ligand for various metal cations.

Uses: As a strong acid, it finds uses as an acid rinse in laundries, removing scales, and in dyeing and bleaching applications. It is also used in extraction of lanthanide metals and as a reducing agent and analytical reagent.

Health effects/safety hazards: Oxalic acid is toxic and harmful. If inhaled, it can severely damage the mucous membranes and respiratory tract, with symptoms such as cough, wheezing, laryngitis, and shortness of breath. Contact with skin or eyes can cause severe irritation, burns and tissue damage. It is toxic when swallowed and it leads to kidney failure.