Methylvinylketone, also known by its IUPAC name But-3-en-2-one or sometimes as MVK, is a chemical compound of the family of enones which is used as precursor and building block of many compounds in organic synthesis.

Formula and structure: The chemical formula of methylvinylketone is C4H6 and its extended formula is CH3C(O)CH=CH2. The structure is formed by a 4 carbon backbone, in which can be found a ketone (-C=O) at the position 2 and a double bond or unsaturation at the position 3. It molecular mass is 70.09 g mol-1. It is the simplest enone. The chemical structures can be written as below, in the common representations used for organic molecules. 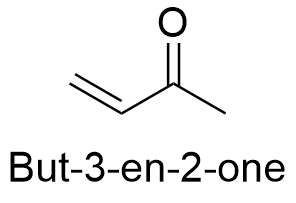 Occurrence: Methylvinylketone has not been reported as found in nature.

Physical properties: Methylvinylketone is a colorless, very toxic liquid with a pungent odor. Its melting point is -7 °C and its boiling point is 81.4 °C. The density is 0.841 g mL-1. It is miscible in water and also soluble in other polar organic solvent as ethyl acetate, ethanol, methanol, benzene and acetone.

Chemical properties: Methylvinylketone is highly reactive. Similar to other ketones compounds, it can easily polymerize, so it should be added some stabilizers in other to avoid the polymerization. It is a Michael acceptor, which allows its use in alkylation reactions. The double bond of MVK is highly reactive and it is use to form adduct that serves of precursors in organic synthesis.

Uses: Methylvinylketone is a versatile and useful intermediate in the preparation of drugs and chemical compounds. Some of these drugs are ethorphine, buprenorphine and etretinate.

Health effects/safety hazards: Methylvinylketone is extremely toxic by inhalation. It can emit toxic vapor when heated and can be an irritant to eyes and mucous membranes. It can be absorbed by skin. It is suspected to be carcinogen.