Iron (II) sulfate, also known as ferrous sulfate, green vitriol, melanterite, is an inorganic salt that has been used for many centuries as a colorant agent. Today it is more used as a medical supplement of iron.

Formula and structure: The iron (II) sulfate chemical formula is FeSO4. The molar mass is 151.91 g/mol. This salt is found in a broad range of hydrated salts with the formula FeSO4.xH2O, while the most widely used is the heptahydrate iron (II) sulfate FeSO4.7H2O with the molar mass of 278.02 g/mol. The mono-, penta- e hexahydrate salts are also largely used. The molecule dehydrate es formed by one cation ferrous Fe2+ and one sulfate anion SO42-. Its chemical structure can be written as below, in the common representations used for organic molecules. 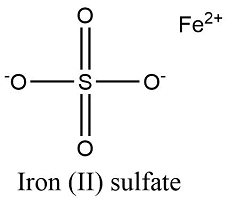 Occurrence: Iron (II) sulfate can be found in nature. It is always found in the form of hydrate salts and it is present in minerals as Szomolnokite (monohydrate), Rozenite (tetrahydrate), Siderotil (pentahydrate) and others. The dehydrate form is obtained after desiccation of the hydrate salts.

Preparation: Iron (II) sulfate can be prepared commercially from the reaction of metallic iron with sulfuric acid in a reaction that emits hydrogen gas as a side product, so should be performed carefully:

Iron (II) sulfate can also be prepared from the oxidation of the mineral pyrite (FeS2) in air producing as a side-product sulfuric acid:

Chemical properties: Iron (II) sulfate is a reducing agent that can be used in laboratories to catalysts some reactions. It can act reducing some compounds as the chlorine gas to form useful iron salts. For example:

It can also be used to produce iron oxides from heating the salt to high temperatures:

Health effects / safety hazards: Iron (II) sulfate is dangerous if swallowed in high concentrations. It can cause skin and eye irritation. It is not flammable.