Histamine, known under the IUPAC name of 2-(1H-Imidazol-4-yl) ethanamine, is an organic compound used as stimulant of gastric secretion and as a centrally acting neurotransmitter.

Formula and structure: The histamine chemical formula is C5H9N3 and its molar mass is 115.15 g mol-1. The molecule is formed by an imidazole ring (heterocycle of 5 member, which 2 of the member being nitrogen atoms) and a chain of two carbon atoms that finish with a amine group. The cyclic part is planar due to the sp2 conformation of the aromatic ring; while the atoms of the chain have a free rotation (all of them have a sp3 conformation). Its chemical structure can be written as below, in the common representations used for organic molecules. 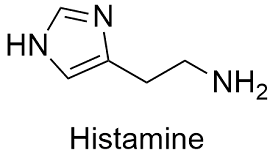 Occurrence: Histamine is found in human beings and animals and also in some bacteria. It is produced y the basophils on the nearby connective tissues.

Physical properties: Histamine is a colorless, odorless, needle solid. The histamine melting point is 83-84 ºC and its boiling point is 209-210 ºC. It is soluble in water, ethanol and in methanol. It is poor soluble in diethyl ether.

Chemical properties: Histamine structure is very similar to the amino acid histidine, which is formed by an imidazole ring, so that it can easily react due to the aromaticity of the ring and the lonely electron pair under the nitrogen of the ring. Interestingly, the molecule has a second main reactive site, the group –NH2 present on the extreme of the molecule, which also has a electron pair free.

Uses: Histamine has a wide variety of functions on the body. It is related to the vasodilation process and blood pressure, thus it can be injected in patients to control these parameters. It is also used in the regulation of cycle of sleep-wake up due to the histamine is a neurotransmission which regulates these processes. It is also used in multiple sclerosis and gastric acid disorders.

Health effects / safety hazards: Histamine is very novice and toxic when consumed in large quantities. It can cause allergic process and can irritate skin and eyes. It is not flammable.