Formula and structure: The glucosamine chemical formula is C6H13O5 and its molar mass is 179.17 g mol-1. The molecule is a monosaccharide, which is part of the chitosan and chitin. The structure is a heterocyle of 6 members, which 3 hydroxyl substitutes, one CH2OH- and one amine group. Its chemical structure can be written as below, in the common representations used for organic molecules. 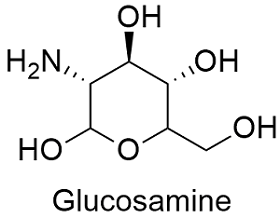 Occurrence: Glucosamine is a major component in exoskeletons of crustaceans and other arthropods. It can also be found in some fungi such as Aspergillus sp.

Preparation: The glucosamine is extracted from the exoskeletons which contain chitin, such as shrimp or lobster. The process is an hydrolysis performed with HCl. Recgently, it has been produced by fermentation of corn or wheat with Aspergillus.

Physical properties: Glucosamine is a colorless, tasteless solid. Its density is 1.563 g mL1- and its melting point is 150 ºC and at higher temperatures, it decomposes. Glucosamine is highly soluble in water and ethanol. It is not soluble in benzene or other organic solvents.

Chemical properties: Glucosamine is a natural precursor for the biosynthesis of nitrogen-containing-sugars. The biosynthesis of glucosamine is made from the sugars fructose and the amino acids glutamine. Glucosamine structure is very polar and the multiple polar groups such as hydroxyl and amine allow the formation of hydrogens bonds between the glucosamine molecule and other chemical compounds. It also explains the large solubility in water.

Uses: Glucosamine is used as supplement by thousands of people around the world, thus it is a value product of many pharpmaceutical companies, even when it has not been approved by the FDA (Food and Drugs Administration) as a treatment of any disease. The main use of glucosamine is in the treatment of osteoarthritis.

Health effects / safety hazards: Glucosamine ingested in large quantities can cause diarrhea, heartburn and vomiting. It is no flammable.