Ferric chloride, also known as iron (III) chloride, is an inorganic salt used as catalyst or intermediate in chemical industry. It is also used in the treatment of wastes. 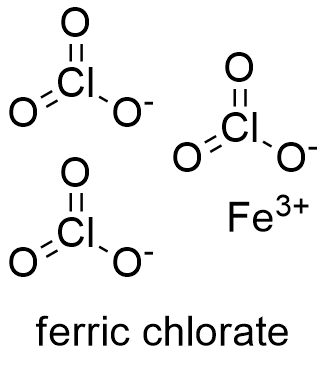 Preparation: there are several procediments to prepared ferric chloride in its anhydrous or hexahydrate configuration. The simplest process is the direct chlorination by reacting iron and chlorine in their elemental configuration

Additionally, there are other methods such as oxidation of iron (II) chloride (reaction I) or reaction of ferric oxide with hydrochloric acid (reaction II):

Physical properties: anhydrous ferric chloride is a salt, which in general present an orange-brown color. Sometimes, the ferric chloride crystal can have a dark green color. Its melting point is 304 ºC and its density is 2.8 g mL-1. Its soluble in water but reacts exothermically and the resulting solution is very corrosive. It is soluble in organic solvents.

Chemical properties: ferric chloride is formed by the cation Fe+3, which a metal transition element with d-orbital available to accept electrons, thus the ferric chloride is a weak Lewis acid and it can be used as catalyst in organic synthesis. The Fe+3 is a cation with small size and very charged, thus it is rapidly hydrolyzed by water molecules to form the hexahydrate complex.

Uses: Ferric chloride is used water treatment due its capacity to react in water to a corrosive and acid solution. It is used in electronic industry to print circuit boards due ferric chloride can etch the copper by promote the oxidation from copper (I) to (II). Ferric chloride is part of the chemical process to produce PVC by catalyzing the obtainment of the intermediate ethylene dichloride.

Health effects/safety hazards: ferric chloride is very toxic and corrosive to the skin, eyes and other mucous. It can cause the death by ingestion. When heated, ferric chloride can produce toxic gases.