Cisplatin, with the IUPAC name of cis-diamminedichloroplatinum (II), is an chemical substance mostly and largely used as drug in chemotherapy treatment in various types of cancer. It is on the World Health Organization (WHO) model list of essential medicines needed in a basic health system.

Formula and structure: The cisplatin chemical formula is [Pt(NH3)2Cl2] and its molar mass is 300.01 g mol-1. Cisplatin is an coordinated molecule formed by the metal platinum Pt which is coordinated to 2 atoms of chloride (Cl) and 2 ammonia (NH3). The substituent atoms are -cis because these lie on the same plane in the molecule. The molecule has an tetrahedral structure similar to the methane. Its chemical structure can be written as below, in the common representations used for organic molecules. 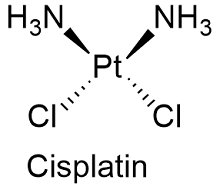 Occurrence: Cisplatin is just obtained by chemical synthesis. It was synthesized by the first time in 1844 by the French chemist Mario Rampini.

Preparation: Cisplatin is synthesized from the potassium tetrachloride that reacts with potassium iodine to form a potassium tetraiodide complex. This anion can react with ammonia and selectively replace 2 iodine by 2 ammonia on the tetraiodide, forming a complex of K2[PtI2(NH 3)2]. This complex reacts with silver nitrate and 2 iodine are substituted by 2 water molecules that reacts until cisplatin when potassium chloride is added.

Physical properties: Cisplatin is a yellow to orange crystalline solid. Its density is 3.738 g mL-1 in the anhydrous salt and 1.51 g mL-1 in the monohydrate. The melting points is 268 ºC and sbove this temperature it decomposes. It is poorly soluble in water and soluble in demethylformamide.

Chemical properties: Cisplatin is a drug used in chemotherapy mainly because it blocks DNA synthesis and induces apoptosis through a mechanism of action via p53. It is ingested as cisplatin but in body, it dissociates and the chlorine atoms leave the complex. The dissociated structure can link to the DNA of the cancer cell DNA and destroy it. Moreover, cisplatin can inhibit cell mitosis of cancer cell DNA.