Chlorine dioxide, also known as chlorine (IV) dioxide, is an inorganic compound used in the drinking water disinfection and in the making paper process.

Formula and structure: The chlorine dioxide chemical formula is ClO2. The molar mass is 67.45 g/mol. The molecule is formed by one chlorine anion Cl4+ and two oxygen anions O2-. Two oxygen atoms are bound through double bonds to the chlorine atom, forming a molecule with a "V" shape and with an angle of 117° between the oxygen atoms. Its chemical structure can be written as below, in the common representations used for organic molecules. 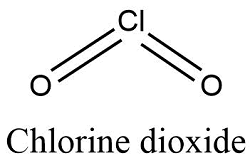 Occurrence: Chlorine dioxide is not found in nature, it should be prepared following one of the methods described below.

Physical properties: Chlorine dioxide is a yellow to reddish gas with an acrid odor. The density of this gas is 2.76 g/mL. Its melting point is -59 °C and the boiling point is 11 °C. At -59 °C, the gas crystallizes forming oranges crystals. It is soluble in water (especially in cold water) and highly soluble in alkaline and acidic solutions, particularly in sulfuric acid solutions.

Chemical properties: Chlorine dioxide exhibits important paramagnetic characteristics. It is though that one electron remains over the chlorine atom, forming a radical species. The final structure for the chlorine dioxide molecule is still polemic due to the researchers have not been able to identify the way in which the electronic density is distribute through the molecule.

Uses: Chlorine dioxide is widely used around the world in the disinfection of water for human consumption due to the antibacterial and antifungal properties. This oxide is also used in the blenching of wood pulp during the manufacturing of paper. It has falsely advertised as a cure for autism, without any prove of these properties until the moment.

Health effects / safety hazards: Chlorine dioxide is toxic in high concentrations, this even when it can be used in low concentration to disinfect water, its direct consumption is dangerous. At high pressures, it can explode.