Chloric acid or chloric (V) acid is a inorganic acid used as reagent and reactive to prepare some chlorate salts and other chemical products.

Formula and structure: The chloric acid chemical formula is HClO3 and the molar mass is 84.46 g mol-1. This salt is formed by one proton (H+) and one chloric anion (ClO3-). The chloric anion has a pyramidal-like structure, with a chlorine center atom to which two oxygen atoms are bound through double bonds and 1 oxygen atom is bound in a simple bond. The chlorine atom also has a electron pair that repealed the oxygen atoms and form the pyramidal structure.Its chemical structure can be written as below, in the common representations used for organic molecules. 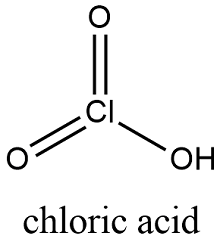 Occurrence: Chloric acid is not found in nature. It is prepared following the methods described below.

Preparation: Chloric acid can be prepared through two different methods:

- By the reaction of barium chlorate and sulfuric acid, following by the filtration of the barium sulfate formed:

- By heating the hypochlorous acid to additional produces hydrogen chloride:

Physical properties: Chloric acid is a colorless liquid. Its density is 1 g mL-1. It is soluble in water. It is an oxidant and corrosive.

Chemical properties: Chloric acid is very reactive, it can easily reacts oxidizing many compounds. It is a strong acid, which means in water solution it is found in its deprotonated form:

In cold water, it can form other chlorine acids and chlorine species:

Uses: Chloric acid is used to prepare chloride salts and other chlorine species. It is also an oxidizer agent.

Health effects / safety hazards: Due to its oxidizer characteristic, it should be used very careful and must avoid the contact with other chemical compound that can react easily with. Chloric acid is a strong acid, thus it can cause severe eyes and skin damage.