Calcium acetate, also known as acetate of lime or calcium ethanoate, is a chemical compound used in medicine to treat the excess of phosphate in patients with kidney disease).

Formula and structure: The calcium acetate formula is C4H6CaO4 and the molar mass is 158.17 g mol-1. The extended formula is Ca(CH3COO)2. The salt is formed by two acetate anions (CH3COO-) and one calcium cation (Ca2+). This salt is very hygroscopy, thus it is commonly found as a hydrated salt. Its chemical structure can be written as below, in the common representations used for organic molecules. 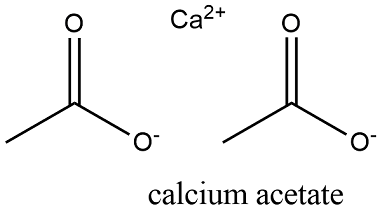 Occurrence: calcium acetate has not been found as free compound in nature.

Preparation: Calcium acetate is prepared using minerals as calcium hydrate by the reaction of calcium-containing minerals such as calcium carbonate or limestone with acetic acid (it can be a diluted solution, for example, vinegar)

When it is used lime, the reaction occurs when passing acetic acid vapor over the heated mineral.

Chemical properties: Calcium acetate is a chelator, it means this molecule can form a different type of coordinated bond name "chelation" because it has a metallic atom (calcium) that can bond to other chemical ions. Calcium atom presents in the molecule is also useful to treat the excess of phosphate in blood, due to it can react to form calcium phosphate, which is insoluble and can be easily excreted.

Uses: Calcium acetate is used as medical treatment to patients with kidney disease; it is also a food additive and it is largely used chelator . It is also used to make buffers. In past, it has been used as precursor in the synthesis of acetone.