Barium sulfide, also known as thioxobarium, is an inorganic salt that is used in the manufacturing of electronic devices and also in the production of other barium compounds.

Formula and structure: The barium sulfide chemical formula is BaS. The molar mass is 169.39 g/mol. The molecule is formed by one barium cation Ba2+ and one sulfide anion S2-. The two ions are bound trough an ionic bond. The geometry of the molecule is octahedral with one cation surrounded by eight anions and vice versa. Its chemical structure can be written as below, in the common representations used for organic molecules. 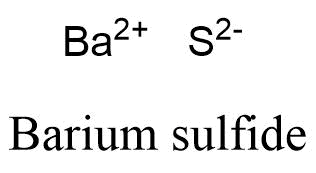 Occurrence:It is not found in nature. Barium sulfide is produced as described below.

Preparation: Barium sulfide is prepared through the Casciarolus' process using coke as a source of carbon and also using the cheap and largely available barium sulfate:

Physical properties: Barium sulfide is a white solid. It is phosphorescent. The density of this salt is 4.25 g/mL. Its melting point is 2235 °C and above this temperature, it decomposes. Barium sulfide is slightly soluble in cold water but it is highly solubility in hot water. It is insoluble in ethanol and organic solvents.

Chemical properties: Barium sulfide exhibits the characteristic properties of other sulfides; it shows interesting behavior against the light. First, barium sulfides can deviate X-rays, so it is used in biomedical application to check tissues in details. It can also emit in short wavelength, so it is used in electronics equipments.

Uses: Barium sulfide is used as source for preparing other barium compounds such as the barium carbonate or barium sulfate. It is particularly used in the preparation of the pigment lithopone, which is a mixture of barium sulfate and zinc sulfide.