Barium sulfate is an inorganic salt that is mainly used in the production of concrete and as X-ray contrast medium.

Formula and structure: The barium sulfate chemical formula is BaSO4 and its molar mass is 233.40 g mol-1. The molecule is formed by the calcium cation Ba+2 and the sulfate anion SO4-2. The structure of the barium sulfate is an orthorhombic lattice. Its chemical structure can be written as below, in the common representations used for organic molecules. 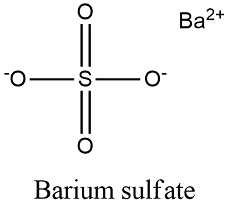 Occurrence: Barium sulfate can be found in some minerals; particularly the mineral barite is a large source of barium sulfate. The purification and extraction of barium sulfate from the mineral is made through a process called carbothermal reduction, which consists in heating the material with coke and then, the product of this reactions is treated with sulfuric acid.

Preparation: Barium sulfate is mostly obtained from the mineral barite, however there other less commercial methodologies to produce:

b) It can be produced by the reaction between barium sulfide and sulfuric acid.

Physical properties: Barium sulfate is an odorless, white or yellow crystalline solid or powder. Its density is 4.25 g mL-1. Barieum sulfate melting is 1580 ºC and above this temperature it decomposes. It is insoluble in water, dilute acids or ethanol but it is soluble in concentrate acids,

Chemical properties: Barium sulfate is one of the salts most used as indicator of pH. It can also be used to test the quantity of sulfate dissolve in a solution, since sulfate reacts with barium to form a precipitated which can be dried and its mass determinate.

Uses: Barium sulfate is used in medicine, as a cockatil in the radio-opaque diagnosis. It is the major source of barium and it is very used in chemical and a pharmaceutical industry due it is the only salt of barrio, which is not toxic. It is only used in the manufacturing of paper coatings, textiles, rubbers and plastic. It is also used as component of pyrotechnics and as catalyst supporter.

Health effects / safety hazards: Barium sulfate in high concentration is harmful by ingestion. It is also an irritant to eyes. It causes damage to organs by long-term exposition. It is not flammable.