Barium hydroxide, also known as baryta, is an inorganic compound used as a source of barium metallic and also as additive or reagent in chemical industry.

Formula and structure: The barium hydroxide chemical formula is Ba(OH)2. It can be present is three forms: anhydrous, monohydrate and octahydrate with the the molar masses of 171.34 g mol-1, 189.955 and 315.46 g mol-1 respectively. The compound structure is formed by two hydroxyl anions (OH-) and 1 barium cation (Ba2+). If it is hydrated, one or eight water molecules are surrounded the cations and anions. Its chemical structure can be written as below, in the common representations used for organic molecules. 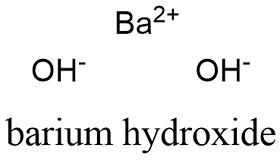 Occurrence: Barium hydroxide is commonly found in nature, as present in many minerals.

Preparation: Barium hydroxide can be prepared from the reaction of barium oxide (BaO) with water:

Chemical properties: Barium hydroxide forms alkali solutions when dissolved in water due to the release of hydroxyl anions. Barium hydroxide is used to form barium salts because it can react with sulfuric, phosphoric and other acids to form the respectively salts (for example, barium phosphate).

Uses: Barium hydroxide is used as a source of barium to produce other barium salts as barium phosphate, barium sulfide and barium sulfate that are using in chemical industry in diverse processes. Barium hydroxide in an analytical standard used for the titration of weak acids due to its alkali features.

Health effects / safety hazards: Barium hydroxide is a strong base, thus it can cause health damages and reacts violently with other chemical compounds, can cause severe skin and eye damage. It is harmful if swallowed or inhaled. It can be corrosive to metals.