Barium acetate, also known as barium salt of acetic acid or octan barnaty, is a salt used as a catalyst and also as a component of some pigments and paints.

Formula and structure: The barium acetate chemical formula is C4H6BaO4. The molar mass is 255.42 g/mol. The condensed formula is Ba(CH3COO-)2 and is formed by one barium cation joined to two acetate anions CH3COO-. The structure of the acetate ion is planar due to the pi bond between C=O. The geometry of the molecule is planar. Its chemical structure can be written as below, in the common representations used for organic molecules. 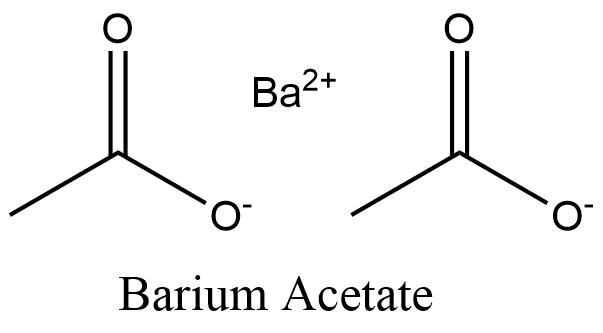 Occurrence: Barium acetate is not found in nature. It is prepared from one of the methods described below.

Preparation: Barium acetate is prepared from two reactions. The first of these reactions os the reaction of barium carbonate with acetic acid, a very easy and cheap method to prepare the salt:

The second method is through the reaction of the barium sulfide and acetic acid:

Chemical properties: Barium acetate can decompose when heating to form barium carbonate. It can also be used to form different salts when used in reaction with acids:

Uses: Barium acetate can be used to produce other barium components. It is also used in the preparation of other acetates. A second range of uses includes its use in the formulation of pigments, paints, dyes, coats. It can also be used as a catalyst in organic synthesis.

Health effects / safety hazards: Barium acetate is very toxic and can cause severe damage if swallowed or inhaled. It is not flammable.