Antimony (V) fluoride, also known as antimony pentafluoride, is an inorganic compound used as catalysts to prepare other chemical compounds.

Formula and structure: The antimony pentafluoride chemical formula is SbF5 and its molar mass is 216.74 g mol-1. The id formed by a central cation of antimonium Sb+5 and 5 fluoride anions F-. The geometry of the molecule is a trigonal bipyramide, with a base formed by 3 bonds Sb-F and two axial bonds, which form the vertices. Its chemical structure can be written as below, in the common representations used for organic molecules. 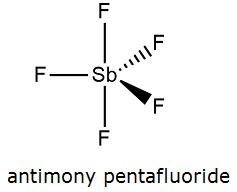 Occurrence: Antimony (V) fluoride is not found as a natural compound in our planet, it prepared after synthetic methods.

Preparation: Antimony pentafluoride is synthesized through the reaction between the antimony pentachloride and hydrogen fluoride:

Chemical properties: Antimony (V) fluoride is largely used as catalyst due to it is an acid of Lewis, which means, it is deficient of electrons, thus it can accept easily the electrons available in nucleophiles. The compound can act as a Lewis acid because the antimonium atom has enough free orbitals to accept more electrons.

Use: Antimony (V) fluoride is used mostly as catalyst due to its properties as Lewis acid. It can promote other reactions, for example the improvement of the oxidations promotes by F2, forming a complex of [SbF6]- that is very interesting to produce other antimony adducts:

Health effects / safety hazards: Antimony (V) fluoride is extremely toxic if swallowed or inhaled. It is dangerous to eyes, skin and mucous. It is highly corrosive to metals and can react easily with water.