Acetone, also known by the IUPAC name 2-propanone, is a chemical compound mainly used as solvent in chemical industry and antiseptic in medicine. It is also a precursor in organic synthesis.

Formula and structure: The acetone chemical formula is CH3COCH3 and its condensed formula is C3H6O. Its molar mass is 58.08 g mol -1. Acetone is the most simple ketone, thus it has is formed by a three carbon chain which has two of the hydrogen from second carbon substituted by an oxygen double bound with the carbon atom. The center of the molecule is planar-trigonal due the C sp2 while the extremes have methyl group with tetrahedral geometry. Its chemical structure can be written as below, in the common representations used for organic molecules. 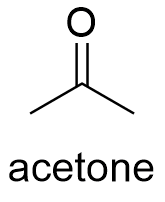 Occurrence: Acetone is found in nature like being part of many organism as plants and animals. It is also found in volcanic gases. In particular, it Is produced by human body through the metabolic process of ketosis. This process is particularly present in people with dabietes or low-carbohydrate diets.

Preparation: The most common method to prepare acetone is the oxidation of cumene. This method has two step; in the first part the benzene reacts with propene to produce the cumene which is oxidized by a flow of O2 to cumene hydroperoxyde (CHP). Then, the CHP is cleaved by the action of catalyst into phenol and acetone:

Other methods are the dehydrogenation of isopropyl alcohol promoted by a copper catalyst.

Physical properties: Acetone is a colorless with a sweetish odor, volatile liquid. Its melting and boiling points are -94.9 ºC and 56.08 ºC. Its density is 0.785 g mL -1. It is miscible with water, alcohol, benzene, dimethylformamide, ether.

Chemical properties: Acetone molecule has a carbonyl group -C=O in the center which result in a molecule polarized because the carbon is less electronegative than oxygen. For that reason, the acetone can be used as reactant with nucleophilic molecules that attack the carbonyl carbon deficient in electrons.

Uses: Acetone is used as an important building block in organic synthesis. It is also very used as medical and cosmetic field, especially as nail polish remover. It is extensively used by the chemical and petroleum industries to produce adhesives and sealants, solvents, coats and paints, plastic and rubber, agricultural products, etc. It is also an intermediate in other organic synthesis.

Health effects/safety hazards: Acetone causes serious eyes damage and mucous irritation. It is suspected to cause infertility or the unborn child. Moreover, the long term exposition can damage some organs. Acetone liquid and gas are extremely flammable.