Acetic acid is an organic acid which is the main component of vinegar. It is also called glacial acetic acid, ethanoic acid or methane carboxylic acid.

Formula and structure: The chemical formula of acetic acid is CH3COOH. Its molecular formula is C2H4O2 and its molar mass is 60.05 g/mol. Acetic acid is a simple carboxylic acid consisting of the methyl group (CH3) linked to the carboxylic acid group (COOH). It can also be considered as the acetyl group (CH3CO) linked to a hydroxyl group (OH). Its chemical structure can be written as below, in the common representations used for organic molecules. 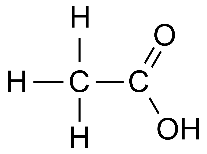 Occurrence: Acetic acid is produced naturally in a dilute form (as vinegar), during the microbial fermentation of sugars. It is also an important metabolic intermediate found in most plants and animals.

Chemically, it is produced by the reaction of methanol (CH3OH) with carbon monoxide in the presence of rhodium-iodine catalyst.

Physical properties: Pure acetic acid is a colorless liquid with a strong, corrosive pungent odor. Its density is 1.05 g/mL, and boiling point is 118 °C. It has a characteristic sour taste, and is highly miscible in water.

Chemical properties: Acetic acid is a weak acid. As a carboxylic acid, it forms typical derivatives such as acid chlorides, anhydrides, esters and amides. It can be reduced (removal of oxygen or addition of hydrogen) to give ethanol. When heated above 440 °C, it decomposes to give carbon dioxide and methane:

Uses: Acetic acid is largely used in the food industry as vinegar, and as an acidity regulator. It is also an important industrial reagent used in the production of various chemicals such as polyvinyl acetate, cellulose acetate, metal acetates, etc. It is also used as a solvent for paints and resins.

Health effects/safety hazards: As a dilute solution (vinegar), acetic acid is safe for consumption. However, its concentrated form is very corrosive to eyes, skin and mucous membranes upon inhalation or contact, leading to severe irritation and/or burns.