An inclined plane wrapped around a cylinder is a simple machine called a screw. They usually have a flat end and a sharp-pointed end as shown in the image to the left.

Screws are used to hold things together as they pull or push the object. Screws may also be used for lifting heavy objects and to tighten things, like the vice in the image to the right.

Because of the screw's ridges, a screwdriver is used to drive a screw into wood as it is turned in a circular motion. It is different than a nail, which can be easily pounded into a piece of wood. The ridges of a screw would make it more difficult to pound into the wood. A screw will hold things together more tightly because of its ridges. 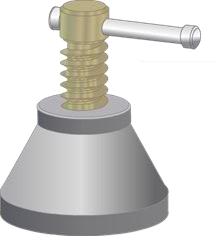 Another kind of screw is called a bolt which usually connects to a bolt. A bolt is almost like a screw but does not have a sharp tip, and it is not screwed into place. Instead, a hole is made with another type of screw called a drilled bit. The bolt is then pushed through the drilled hole. Next, a nut is placed at the end to screw the bolt through. There are many different sizes of screws, nuts and bolts.

The drill bit is also a screw and can make holes in nearly every surface including wood, plastic, metal, and stones when attached to an electric drill. It also has threads and is pointed at one end. The grooves are deeper on a drill bit because they carry pieces of the wood or other material from the hole to the surface as the drill bit turns. 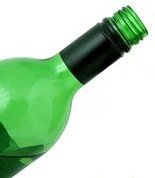 There are many other examples of screws including the grooves on a jar or soda bottle lids, the end of light bulbs, water faucets and hoses, bottle caps, some ink pens, gas tank caps on cars, and many others. As with all simple machines like the screw, they are designed to help make work easier to do.